As a 40 year old, I’m an old first time dad. I’m reminded of my old age every time I bend over to pick up my little one from the bassinet. My lower back aches and my knees sometimes dangerously buckle if they bend too far. Oh to be 25 again!

But then I realize that because we are older first time parents, we don’t have the same stresses as younger first time parents. We’re not stressed about going over a baby budget because we don’t have one. Both of us don’t have a job to commute to. And we’ve built our cozy little dream home in San Francisco. Having more time to spend with our little one is priceless, especially the first five years before kindergarten.

We therefore have two variables to discuss to come up with the optimal age to have a baby: The Biological Best Age and The Economical Best Age.

Given money is the root of all pain and suffering, it’s important to dig deeper into the Economical Best Age. Most articles you read on the subject only address the Biological Best Age.

The Biological Best Age To Have A Baby

It wasn’t until about age 35 that I started seriously considering having a baby. My wife was 32 years old at the time, and they say a woman’s oocytes are best before age 35. We were shown a series of graphs like the ones below regarding decreasing fertility rates and increasing miscarriage rates as a woman ages.

I don’t have to explain that going through a spontaneous abortion is a psychologically traumatizing event, especially if you’ve been trying for years.

Related: The Difficulties Of Pregnancy

Intrauterine insemination (IUI) is a fertility treatment that involves placing sperm inside a woman’s uterus to facilitate fertilization. The goal of IUI is to increase the number of sperm that reach the fallopian tubes and subsequently increase the chance of fertilization.

In Vitro Fertilization (IVF) is a medical procedure whereby an egg is fertilized by sperm in a test tube or elsewhere outside the body. Below is a chart of miscarriage rates by age after a IVF cycle. Starting around the age of 37, you can see the slope steepen. At around 44 years old, you only have a 50% chance of conceiving through IVF.

IVF is much more difficult on a woman due to the drugs, hormonal changes, and number of doctors visits required. Further, the cost of IVF is roughly $12,000 – $17,000 per cycle. Can you imagine the stress and sadness of not only losing $17,000, but also failing to conceive after each attempt? Devastating. 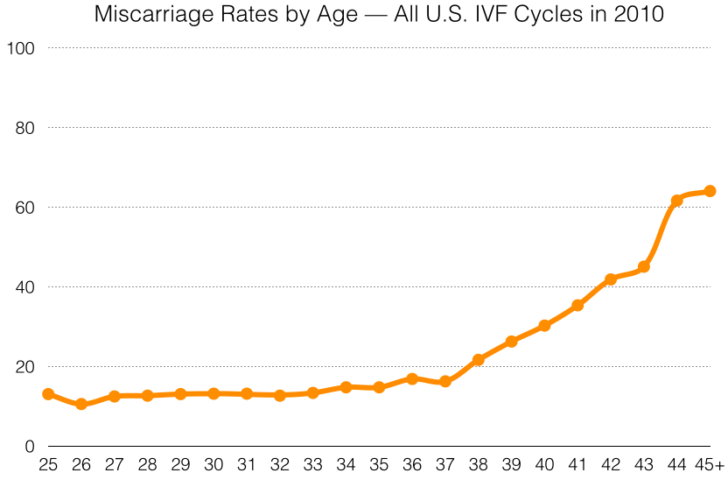 Based on the data, the biological ideal age to have a baby is in your early 20s, and no later than 40. Of course, having a baby after age 40 can be done, as Halle Berry showed us when she gave birth at age 47. Just know the chances of complications are much higher, as are the chances of spending tens of thousands of dollars with no success.

The Economical Best Age To Have A Baby

Some will disagree, but I believe it’s best not to have a baby if you are unable to take care of yourself. In other words, if you are drowning in debt, can’t hold a stable job, aren’t saving any money for a rainy day, hooking up with multiple partners, don’t truly love your partner, and love to snort cocaine every time you go out, it’s best to not be a parent.

Babies are an incredible joy, but require a tremendous amount of time for proper care. For the first several months, my wife and I each spent 20 – 24 hours a day with our little one. In order to do so, we purposefully engineered our lifestyles to live off passive income so we wouldn’t have to work for someone else, ever.

When our baby started sleeping more than four hours straight a night, we finally felt like we could breathe again. Now, we have a more balanced life and only spend about 16 – 18 hours a day each with our little one (includes sleep).

If we had experienced money stress on top of baby care stress and sleep deprivation, there’s no doubt we would have a strained relationship. But because our finances were taken care of, we never fought and only went through occassional mood swings when the postpartum hormones on both sides randomly kicked in for no reason.

Let me suggest some financial guidelines you should consider before having a baby. Please note I’m assuming you’ve already found the right stable partner.

1) A Net Worth Target

Given most of us want to send our kids to college and given the $233,000 – $500,000 figure is for the average middle-income household, the average cost of college can also equate to a net worth target goal before having kids. Yes, of course you can have kids with much less wealth and be fine. I’m just providing some guidelines for those who enjoy analyzing for the future

Having a baby may or may not derail your career progression due to workplace discrimination and necessary time off to take care of your little one. I’m completely for each parent taking a minimum of three months parental leave, and working from home a couple more months if possible. Understandably, some employers don’t see it this way given how competitive business is today.

For any aspiring ladder climber, your 20s is a time to earn your stripes. You’re generally a cost center to the company, which means you don’t come from a position of strength. Only after you start generating more benefits than you cost will you gain negotiating power. And only after your company has promoted you to a certain level will they believe in your value.

Given this logic, you might consider having a baby only after achieving a third promotion or greater. The first promotion doesn’t count for much since you’re going from junior bottom feeder to senior bottom feeder. But by promotion number three, it’s become clear you’re actually creating a lot of value for your organization. Three or more promotions is not a fluke, which means you should feel confident knowing that you’ve actually got good enough skills other companies want too.

My career milestone goal was to make Vice President (Analyst, Associate, VP, Director, Managing Director) before seriously thinking about family. After getting promoted to VP, I felt a tremendous sense of relief because I knew that if I was ever laid off, I had a high chance of getting hired as a VP at a different investment bank.

Related: How To Get Paid And Promoted Faster

According to Princeton economist Angus Deaton and psychologist Daniel Kahneman, $75,000 is the income level researchers have deemed where happiness no longer increases the more you make. They partnered with Gallup to survey 450,000 Americans in 2008 and 2009. Thanks to inflation, that income level is closer to $85,000 a year in 2017.

I argue the ideal income level for maximum happiness is closer to $250,000 per couple, especially if you live in an expensive coastal city like San Francisco. According to the US Department of Housing and Development in 2017, a San Francisco or San Mateo family of four with an income of $105,350 per year is considered “low income.” In San Francisco, you can actually qualify for subsidized housing if you make only $100,000 a year.

Therefore, I recommend making at least $85,000 as a household if you live in the heartland of America, or $250,000 if you live in a coastal city before having children. With such income, you’ll be able to ideally afford to buy a home, comfortably pay for children expenses, and save at least 20% of your salary for retirement.

Related: How To Make Six Figures At Almost Any Age

The Best Age To Have A Baby

If I were to choose a specific age, I’d choose 32 as the best age to have a baby for a woman or man because the parent will have roughly 10 years of post college life experience. It takes time to mature as a working adult. 10 years of doing anything should give you enough confidence to take the next step if you so choose. You’re still in a biologically low risk zone and have had plenty of time to get your finances in order. Whatever age you feel is ideal, start one or two years before that ideal age because it takes on average 7 to 8 months to conceive if you have no issues.

It’s also important to think about minimizing divorce/breakups after having a baby. One would think that the older you are, the more you know what you want and don’t want in a partner. The more relationships you go through, the higher the chance you’ll find one that sticks, although not always the case.

There’s one final important insight I’ll leave you with. When you have your baby, you will love him or her like you’ve never loved anyone before. Therefore, you will wish you had your baby sooner, so you could have spent a greater portion of your remaining life together.

Thinking about what you entered……..
You are in!
Please try again!

This site uses Akismet to reduce spam. Learn how your comment data is processed.